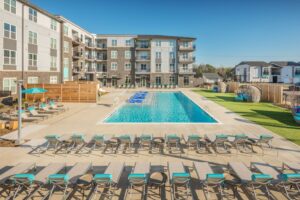 The community, built in 2018, is just northeast of Downtown Charlotte, which has become a headquarters hub for several Fortune 500 companies including Bank of America, Lowe’s, and Honeywell.

“Blu at Northline presented us a great opportunity to buy a Class A asset in Charlotte, North Carolina,” said David Nelson, Hamilton Zanze’s chief transactions officer. “The property features a robust amenity package, a prime location in the University City submarket along the Lynx Blue Line, and offers residents the quality of life provided by the city’s energetic urban core. As this is our first acquisition in North Carolina, we’re very excited to enter the Charlotte market and look forward to continued growth in the region.”

The Kirkland Company’s North Carolina team led by Dennis Harris, Matt Behr, and Austin Haney arranged the sale. “We have been fortunate to work closely with Hamilton Zanze for years in Tennessee and various other states.  Their reputation and track record speaks for itself, and our team is excited to see them enter the North Carolina market with the Blu at Northline acquisition.” Harris said.

To learn more about Blu at Northline, please visit https://www.missionrockresidential.com/apartments/nc/charlotte/blu-at-northline/

ABOUT HAMILTON ZANZE
Hamilton Zanze (HZ) is a private, San Francisco-based real estate investment company that owns and operates apartment communities. Since its founding in 2001, Hamilton Zanze has acquired over $5.1 billion in multifamily assets primarily in the Western, Southwestern, and Eastern U.S. The company currently owns and operates 97 properties (22,505 units) across 15 states and 29 markets. For additional information, visit www.hamiltonzanze.com.

ABOUT THE KIRKLAND COMPANY
The Kirkland Company (TKC) specializes in the sale of apartment communities in ten states throughout the Southeast. The firm is headquartered in Nashville, TN and has closed over 648 multifamily transactions since its inception. Find out more about TKC at www.thekirklandco.com.